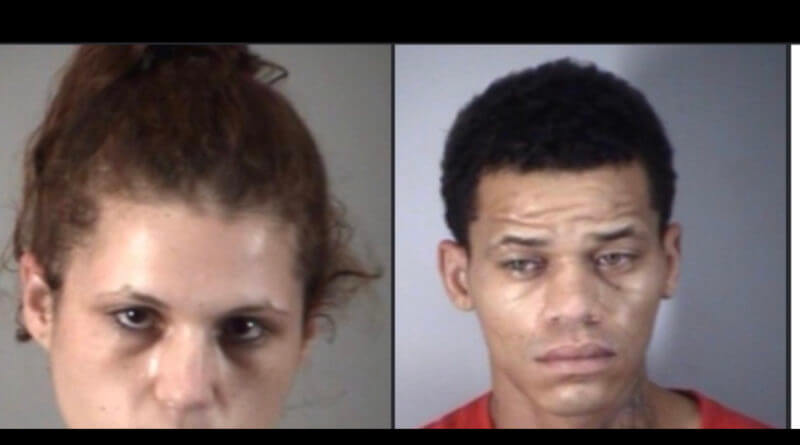 A pair on the run for robbing area churches and a local vehicle were arrested in Florida recently, according to a release from the arresting agency.

the couple were wanted on theft of an auto, described below:

The New Albany Police Department is looking for two people of interest for “Theft of an Auto.” The vehicle was taken from 301 Mississippi Street in New Albany, MS.

Daniel Cruz Britt, is a black male and Kalley Breanne Foreman, is a white female.

They were also suspects in these church burglaries:

Local police are asking for help from the public related to a string of recent church burglaries in the Union County area, according to a release from new Albany Chief Chris Robertson.

The New Albany Police Department and the Union County Sheriff’s Department are asking for the public’s help for any information on the church burglaries we have had, in the city and county, in the last few days.

here is the release from Lake County Florida:

Just before midnight on Saturday August, 15, 2020, Deputy Zachary Sullivan responded to a suspicious vehicle parked in the parking lot at the Circle K on CR 44 in unincorporated Leesburg. The vehicle was running with the turn signal engaged and two occupants asleep inside. When he ran the Mississippi licence plate the vehicle came back as stolen.

Once backup arrived, Deputy Sullivan and Deputy Kejuan Monroe removed both occupants from the vehicle. The driver, identified as Kalley Breanne Foreman (24) of New Albany, MS, was found to be in possession of Oxycodone and Ecstasy, a loaded firearm. Ms. Foreman also had an active warrant out of Mississippi.

The passenger, identified as Daniel Cruz Britt (34) of Leesburg, also had multiple active warrants out of Mississippi. While checking the passenger side of the vehicle deputies found several items including two iPads, a few computer bags, computer chargers, and other computer peripherals.

While Britt and Foreman were being booked on our local charges, a detective from Mississippi contacted our agency wishing to speak with our deputies about some suspected burglary activity involving this vehicle. Both Britt and Foreman remain in the custody of the Lake County Detention Center without bond.